Archaeologist talks about crystal seekers of the Stone Age 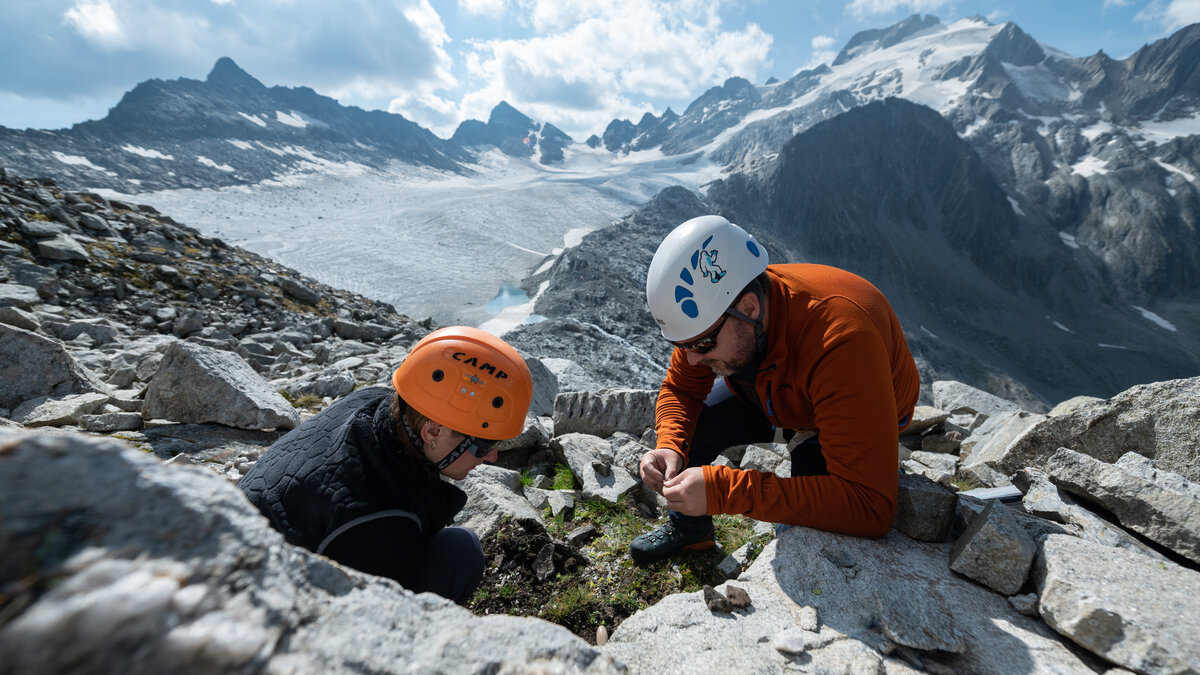 An archaeologist and a woman archaeologist during fieldwork above the Brunnifirn in 2021 on behalf of the Department of Monument Preservation and Archaeology of the Canton of Uri. (Photo Valentin Luthiger / Institute "Cultures of the Alps").

As part of the "Tujetsch VIVA cultura" series of events, archaeologist Marcel Cornelissen will give a lecture on Stone Age crystal seekers in Sedrun on 16 February 2022.

The crystal seeker tradition in the Swiss Alps is ancient. Hunter-gatherer societies mined rock crystals thousands of years ago to make tools on them. In later centuries, too, quartz was repeatedly used in arts and crafts.

A cleft near the Fuorcla da Strem Sut (Lower Strem Gap) on the border between Graubünden and Uri is the first evidence of Stone Age mining of this fascinating raw material in the region. Discovered in 2013 by a crystal seeker from Uri, the cleft at 2817 metres above sea level, freshly cleared by the retreating Brunni firn, opens a new window into the Stone Age for archaeology. This window allows insights into the world of the local hunter-gatherers of the Middle Stone Age (Mesolithic), who were already on the move in the high mountains and in glaciated areas 8,000 to 10,000 years ago, where they also mined rock crystals.

A research and education project is currently investigating the mining and use of rock crystals in the Mesolithic period in the Gotthard Massif and the Valais Alps. The site near the Untere Stremlücke is the centrepiece of the investigations. In 2020, the canton of Uri carried out an excavation at the site in connection with the project. In 2021, fieldwork took place again around the Brunnifirn. Further investigations of the area are planned.

Marcel Cornelissen researches in the canton of Uri

On Wednesday, 16 February 2022, archaeologist Marcel Cornelissen will take the audience on a journey through 10,000 years of Strahler history in his lecture. He will also talk about his work as an archaeologist in the high mountains and in the laboratory. Cornelissen has been researching the Mesolithic of the Alps and the Alpine foothills for more than ten years. He is currently heading the project "Bergeis - Strahlen und Bergkristall in der Steinzeit" (Mountain Ice - Rays and Rock Crystal in the Stone Age) of the Uri Institute "Kulturen der Alpen" (Cultures of the Alps) and the Department of Monument Preservation and Archaeology of the Canton of Uri, which is being carried out in cooperation with the Cantons of Graubünden and Valais.

The lecture "Rock crystal and the Middle Stone Age crystal seeker in the Surselva and the Swiss Alps" will take place on Wednesday, 16 February 2022, at 7 pm in the Cristalla hall in the Dulezi sports and culture hall in Sedrun. You can find more info at www.forumcultural.ch.