Archaeologists are dependent on clues 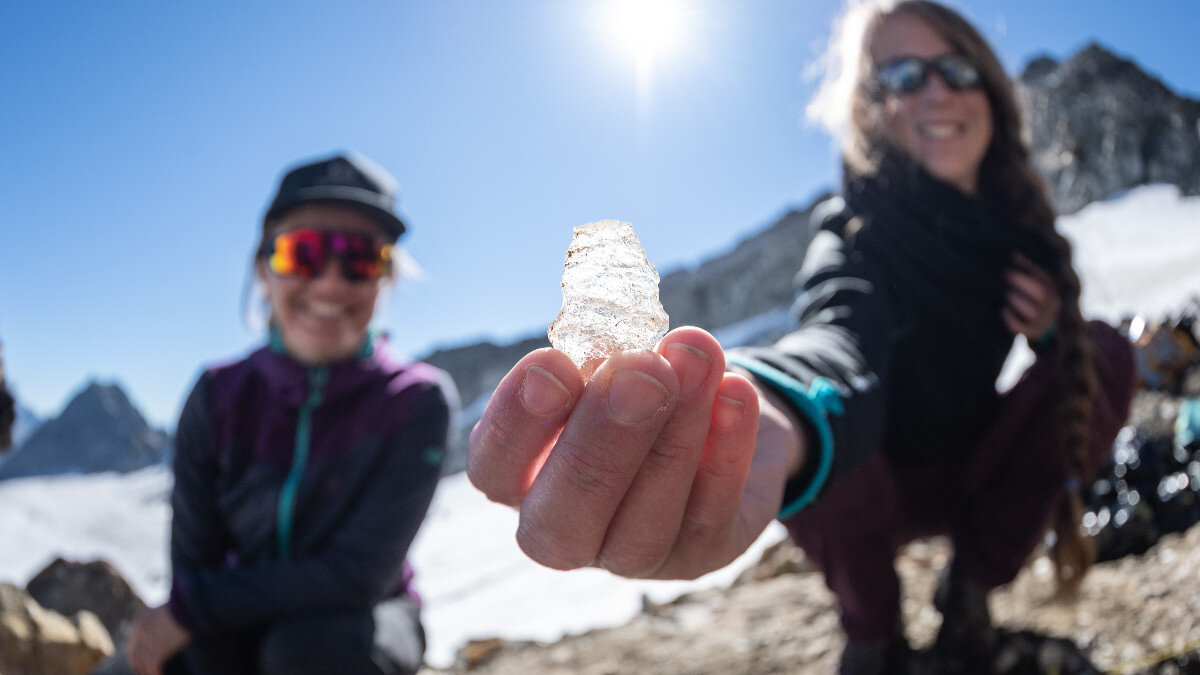 Last autumn, archaeologists investigated the site at Untere Stremlücke and came across evidence from the Middle Stone Age. © Department of Monument Preservation and Archaeology of the Canton of Uri/Valentin Luthiger

Scientists expect the retreating glaciers to reveal further traces from earlier eras. In order to secure the finds, they need the support of attentive mountain hikers.

Eight years ago, a local spotter came across wood remains, antler poles and crystal splinters in a crystal crevice at the very back of the Maderanertal valley in Uri, right next to the receding Brunnifirn glacier. It quickly became clear that people had already searched for crystals at this spot. The glacial ice had preserved the objects for thousands of years.

Investigations showed that people had repeatedly visited the crystal crevice at Untere Stremlücke between 8000 and 5800 years before Christ. This makes the finds from the canton of Uri the oldest artefacts preserved in ice in the entire Alpine region. In the Mesolithic period, people specifically searched for crystal in the mountains of Uri and worked it on site - for example, to make knives, arrowheads, drills or scrapers.

Last autumn, archaeologists carried out a rescue excavation at the site between the Vorderrheintal near Disentis/Sedrun and the Maderanertal in Uri (see box text). This was done on behalf of the Department of Monument Preservation and Archaeology of the Department of Justice of the Canton of Uri, which is responsible for archaeological investigations on cantonal territory. The Uri Institute "Cultures of the Alps" at the University of Lucerne in Altdorf is currently working together with the Canton of Uri to scientifically process the material recovered in 2020 as part of the project "Mountain Ice - Rock Crystal from the Alps in the Middle Stone Age". Every particle, no matter how small, could provide valuable clues to earlier epochs.

Finds at the glacier margin should be reported
As the glaciers are retreating strongly, objects are now appearing at various locations in the Alpine region that were trapped in the ice for centuries or even millennia. Such finds are of particular importance for archaeology. Objects made of organic material (textiles, wood, leather, skin, etc.) can be preserved in the ice for very long periods of time - much longer than in ordinary soil. After melting free, however, they decompose very quickly. The finds provide science with information about epochs long past.

Scientists now expect the melting glaciers to reveal further traces of the past. In order to secure these climatically threatened glacier finds, researchers depend on the support and information of mountain hikers, spotters or hunters: They are asked to photograph and mark possible finds and to communicate the exact location (with coordinates) to the relevant archaeological offices or authorities. This is because archaeological finds are the responsibility of the canton on whose soil they were found. Finds should only be taken away if they are in immediate danger or the site cannot be found again. The contact details of the responsible specialist offices can be found online at www.archaelogie.ch or www.alparch.ch. For Uri, the contact can be found at www.ur.ch/dienstleistungen/3429.

Flyers and posters inform mountaineers about finds
New flyers and posters, distributed throughout the Gotthard and Upper Alps region, now inform mountaineers about the research project. At the same time, they alert alpinists to possible surprises at the edge of the glacier. "It is quite conceivable that further Stone Age excavation sites or other finds will come to light in the mountains of Uri," says project leader Marcel Cornelissen. This is because the mobile wild hunters of the Mesolithic period roamed through large parts of the Alpine region and almost all altitudes between 9500 and 5500 BC. In recent decades, archaeologists have found traces at various sites in the canton of Uri and in the neighbouring Alpine region that point to crystal processing during the Mesolithic period. "The crystal crevice at Brunnifirn was just one of many places where this mobile community stayed," says Cornelissen.

The project "Mountain Ice - Rock Crystal from the Alps in the Middle Stone Age" is being carried out by the Uri Institute "Cultures of the Alps" at the University of Lucerne in cooperation with the Department of Monument Preservation and Archaeology of the Canton of Uri. Other partners in the research project are the Archaeological Service of the Grisons and the Cantonal Office of Archaeology of the Valais. The project website, posters and flyers were financially supported by the Mobiliar Jubilee Foundation and the Otto Gamma Foundation.

In September, the site at Untere Stremlücke can be visited as part of the project "Bergeis - Mountain Crystal from the Alps in the Middle Stone Age". Project leader Marcel Cornelissen, archaeologist on behalf of the Institute "Cultures of the Alps" and the Canton of Uri, will give a short lecture on glacier archaeology and the importance of rock crystals during the Stone Age on Saturday evening, 11 September 2021 at the Cavardiras Hut. On Sunday, 12 September 2021, weather permitting, he will be at the site from 9 am to 4 pm to provide information. A voluntary collection will be taken to cover expenses. The offer is only for well-trained alpinists, as the glacier must be crossed independently. Registration for an overnight stay in the SAC hut is obligatory.