The estate of Hanns In der Gand is being catalogued 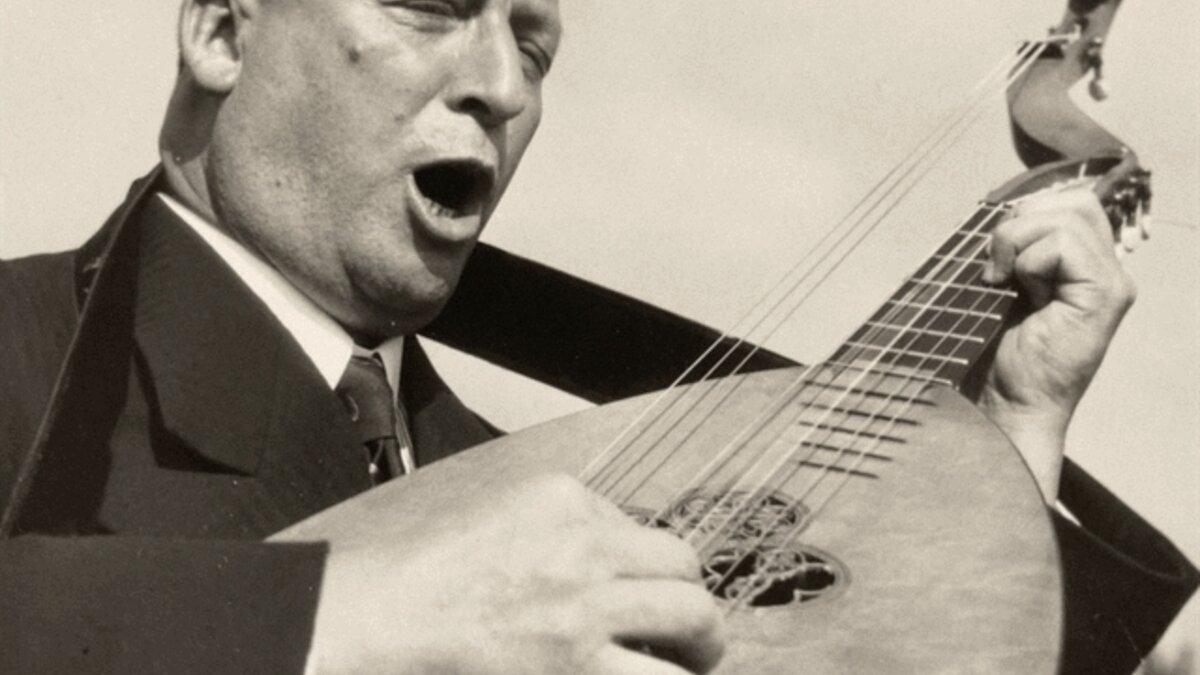 Soldier singer Hanns In der Gand died 75 years ago. As a researcher, he collected thousands of songs from all over Switzerland.

On 24 May 1947 - almost exactly 75 years ago - Hanns In der Gand died in Zumikon, his adopted home in Zurich, at the age of 64. The man from Uri with Polish roots is still known today mainly for the song "La petite Gilberte de Courgenay", which he wrote down and made famous as a singer. As a soldier singer, Hanns In der Gand was extremely popular during his lifetime. At the same time, he travelled the country as a researcher, had the population sing old songs to him and wrote down their texts and melodies. In this way, he collected thousands of folk songs - and was the first folklorist to do so in all four national languages.

For 75 years now, In der Gand's estate has lain dormant, largely unnoticed, in the Swiss Folk Song Archive in Basel. Thanks to the commitment of the "Haus für Volksmusik Altdorf" and the "Institut Kulturen der Alpen" in Uri, this treasure is now being unearthed and digitally catalogued. This will make it accessible to interested persons. At the same time, a research project on the folk song heritage of Switzerland is running at the "Institute Cultures of the Alps". In addition, a commemorative volume on Hanns In der Gand is to be published in spring 2023.

Hanns In der Gand was born in 1882 into the family of the Polish doctor Stanislaus Krupski, who, after escaping from Russian captivity and passing his Swiss state exams, happened to meet the young engineer Louis Favre in Geneva. Shortly before, he had been entrusted with the construction of the Gotthard railway tunnel, which is why medical care had to be provided for the numerous guest workers. Employment with the Gotthard Railway prompted the young doctor to take up residence in Erstfeld, where his eldest son Ladislaus, who later called himself Hanns In der Gand, spent his childhood years.

After graduating from high school in Lucerne, he studied music in Frankfurt am Main and Munich, much to the chagrin of his parents. With his vocal talent as a lyric baritone, training as a singer was an obvious choice. Learning a portable accompanying instrument was also part of his extensive training. The German bass lute with its resonating bass strings, a reconstruction of a baroque instrument, became his trademark from then on. After his music studies, Hanns In der Gand worked as a court actor in Altenburg, Saxony.

Songs became a means of propaganda

During the First World War, In der Gand, who was already popular as a musician, returned to Switzerland and was appointed the first soldier singer in the Swiss army by General Ulrich Wille in 1914. Until the end of the war in 1918, he gave well over a thousand concerts for the active-duty troops. At the same time, he compiled three small songbooks ("Schwyzerfähnli 1-3") for the military and thus left his mark on the song repertoire of the time. On the one hand, In der Gands' vocal performances were intended to boost troop morale and distract from the monotonous daily routine of service. On the other hand, the soldier-singer also had to convey an ideal image of the army with his songs, which meant that he himself was also instrumentalised for propaganda purposes. With verses about General Wille, for example, he had adjusted the image of the commander among the soldiers.

The song "La petite Gilberte de Courgenay", which is still popular today, was picked up by In der Gand during a visit to the troops on the western border and made it known throughout Switzerland. With its German verses and French refrain, it became a welcome bridge between French- and German-speaking Switzerland, as the two parts of the country had become visibly estranged during the First World War. In "La petite Gilberte de Courgenay" and other songs performed by Hanns In der Gand, language borders did not matter, there was only one Switzerland. Thus, the soldier singer made a great contribution to national identity from the First World War to the Spiritual National Defence of the Second World War.

More important for posterity than his singing, however, is ultimately In der Gands' research and editing work in the field of Swiss folk song. In the course of his travels to all corners of Switzerland, thousands of songs were entrusted to him in writing or simply sung to him. The Uri native was the first Swiss folk song researcher to focus on all four national languages. In this way, he also made an important cultural contribution on the way to the official recognition of Romansh as the fourth national language in 1938.

The research on Swiss song at the Uri Institute "Cultures of the Alps" at the University of Lucerne and the associated sub-projects are made possible by the Dätwyler Foundation in Altdorf.