Tourism in the focus of jurisprudence 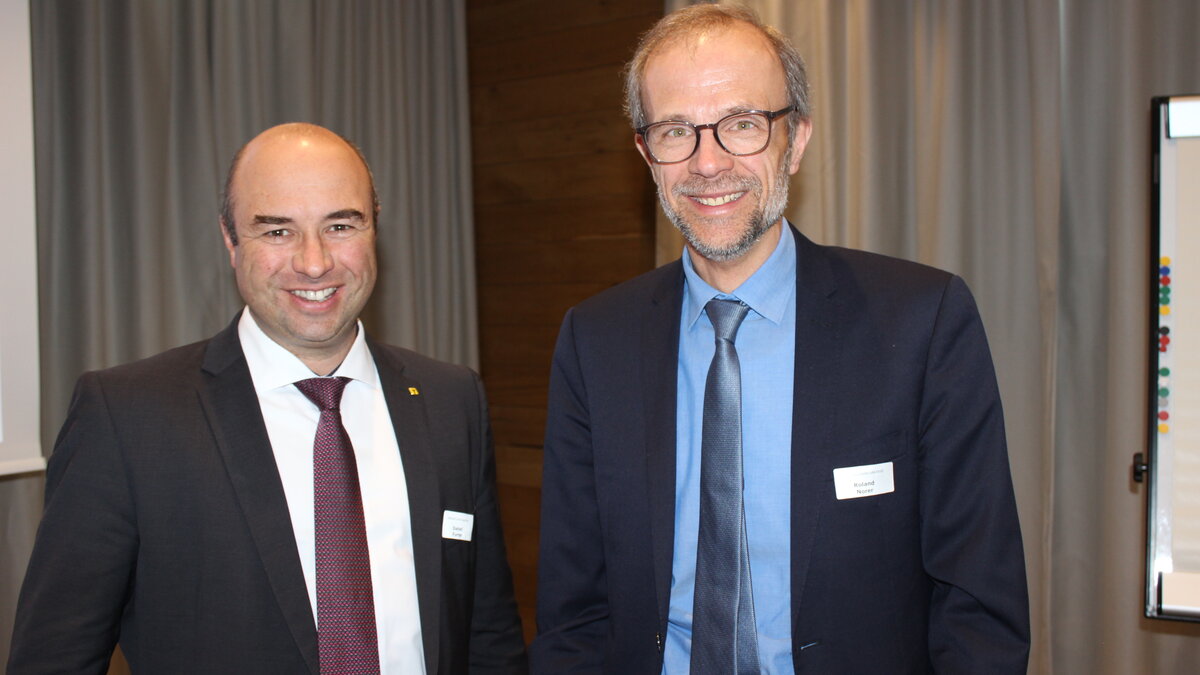 Roland Norer, member of the Institute Management of "Cultures of the Alps", (right) also had the pleasure of welcoming cantonal councillor Daniel Furrer to Andermatt.

Tourism promotion and hybrid hotel forms were the focus of the first "Tourism Law Forum" in Andermatt.

The Institute "Cultures of the Alps" and the University of Lucerne have jointly launched a new series of events dedicated to tourism law in all its facets. The first event in this series took place yesterday (Thursday) and today (Friday) - in Andermatt. The tourist resort in Uri was the perfect venue. After all, the tourism resort of the Egyptian investor Samih Sawiris has been under construction here since 2005, one of the most highly regarded tourism projects in the Alps at the moment. The planning and construction of this resort are linked to a multitude of legal procedures and decisions that have already reached completely new dimensions in their density and scope.

The first conference in the series of events was dedicated to tourism promotion and hybrid hotel forms (mixed forms between the classic hotel industry and the parahotellerie), which are experiencing a certain upswing especially in the wake of the second-home initiative. Around forty people - representatives of tourism organisations, project managers from the industry, administrative staff and lawyers - took part in the event. It became apparent that tourism has long since had points of contact with jurisprudence, and not only because of Lex Koller and the second-home initiative. Every area of the tourism industry is based on legal principles. The topics range from federal economic development measures and cantonal spatial planning to regulations on the use of communal visitor's tax. Even farms that offer sleeping on straw have to comply with certain regulations. "For us lawyers, the field of tourism is exciting because there is practically no universal solution to any problem," says Roland Norer, professor of law at the University of Lucerne and member of the institute management of "Cultures of the Alps". "Every canton and every municipality has different laws and regulations, and every project has to be assessed individually.

Tourism promotion is understood as a public task

Daniel Furrer, cantonal councillor of Uri, welcomed the participants on Thursday at the start of the two-day event and briefly explained how Andermatt has changed in recent years. The first block of the two-day event offered an approach to the topic. Marcus Roller, co-head of the Tourism Research Unit of the "Center for Regional Economic Development" at the University of Bern, spoke about the current trends in Alpine tourism. Trends towards digitalisation, individualisation or more sustainable consumption do not stop at the tourism industry. The industry has to constantly adapt to changing needs. Roland Norer, organiser of the event and co-director of the Institute "Cultures of the Alps", also introduced the concept of tourism law to those present.

The first day of the event was concluded by a fireside chat, for which Emanuel Strub gave an input presentation. The lawyer had closely followed the Sawiris project in Andermatt from the very beginning as the secretary general of the Department of Justice in Uri for many years.

"We will not run out of topics"

Today, Friday, the second day of the event, revolved around the topic of hybrid hotel forms and the consequences of the second-home initiative. Aron Pfammatter, a lawyer from Valais, explained how holiday flats are increasingly managed for tourism today due to current legislation. Georg Simmen, a cantonal councillor and lawyer from Uri, spoke from the point of view of project developers about hybrid hotel forms and showed the importance that apartment hotels now have for tourism destinations. Gabriel Hefti from the Federal Office for Spatial Development then dared to analyse the impact of the Secondary Residence Act and asked whether there might be a need for additional clarification regarding the admission of tourist flats. Finally, law professor Peter Bußjäger from the University of Innsbruck spoke about leisure residences in Austria and how differently the federal states regulate them.

At the end of the two-day event, law professor Roland Norer from the Institute "Kulturen der Alpen" (Cultures of the Alps) summed up the event.