Crystals from Uri: a sparkle that has accompanied people since time immemorial 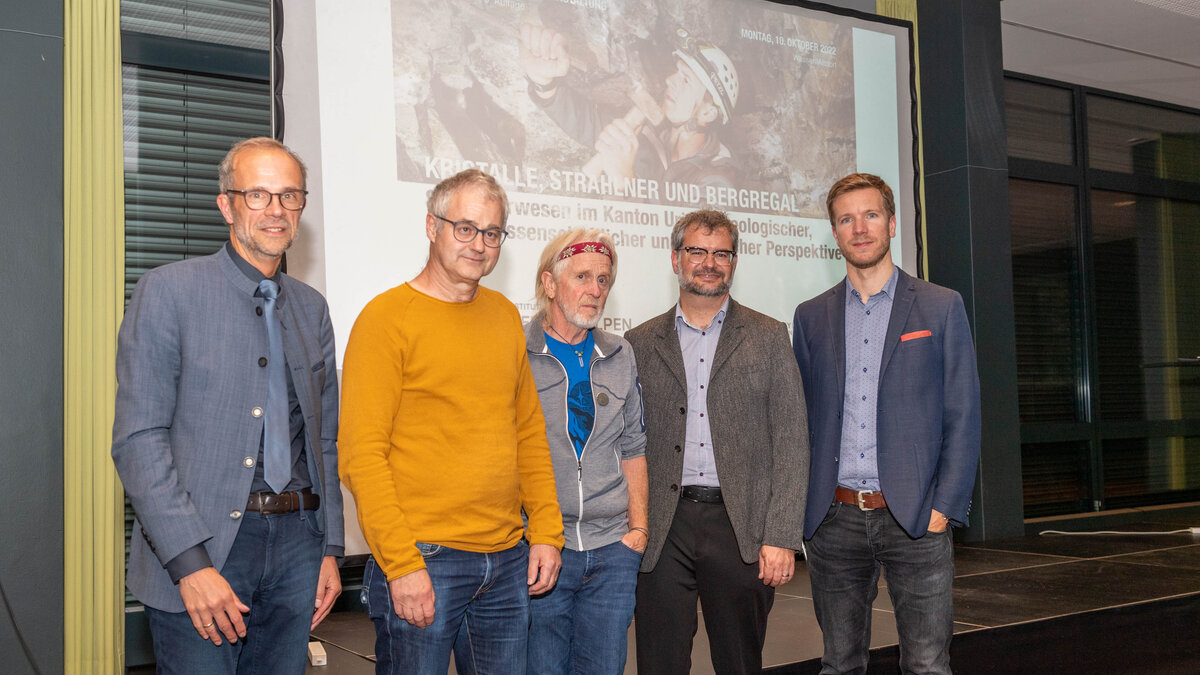 The crystals and minerals from inside the mountains of Uri have been moving people for 10,000 years. The Institute "Cultures of the Alps" showed exciting views of the Strahlner being.

For example, there is the quartz from Uri, popularly known as rock crystal: The brilliance, the geometric shape and the sparkle have fascinated since time immemorial. Adults and children as well as amateurs and experienced blasters. The phenomenon can be explored from different perspectives. This is exactly what the Institute "Cultures of the Alps" did on Monday. "Our institute is interested in the history of crystals, radiants and the mountain valley," said Prof. Dr. Roland Norer, member of the institute's management, in the Uristiersaal in front of a well-filled audience. In three entertaining presentations, the geological, cultural and legal aspects of the Strahlner were highlighted.

It all depends on the arrangement

There are numerous geological treasures in the territory of the Canton of Uri. Geologist Dr. Peter Spillmann explained why this is so. "Crystals and minerals are something valuable that is extracted from the mountains at great expense," Peter Spillmann said by way of introduction. To this end, he showed pictures of steep and impassable areas in Uri that are promising for Strahlner. "These are places where a normal person cannot go, not even the normal geologist," Spillmann said appreciatively. The paths to the mountain treasures are difficult and involve alpine risks, he said. "To find anything at all in the terrain, you need a good eye, experience and intuition."

Peter Spillmann also pointed out the almost unbelievable temporal connections. The earth is 4550 million years old. The oldest minerals from Uri, zircons in very old gneisses, are 3500 million years old. The minerals recovered today were formed 10 to 20 million years ago during the formation of the Alps. There is plenty of supply: the Alps are a relatively young mountain range and uplift, removal and erosion are still in full swing. Many minerals and crystals are still waiting to be discovered underground. Only: it takes about 1000 years for one metre of mountain to be eroded away.

Geologist Spillmann briefly touched on the basic laws of physics and chemistry that lead to the atoms in the crystals being able to arrange themselves at all so that the beautiful and regular shapes can form. A diamond and the graphite of a pencil consist of the same basic material, of quite ordinary carbon. But how the molecules are arranged makes all the difference. "Decisive in the formation of crystals are the conditions that prevailed in the earth's crust - what pressure or temperature."

From Uri to the world - from utensil to castle jewellery

The natural sciences are one thing, the human fascination for the sparkling stones is another. This is where Peter Amacher started with his presentation. He drew on his vast personal store of knowledge, anecdotes and finds. Since time immemorial, crystals have been a cultural asset that brings joy, amazes and inspires dreams. "We now know that Stone Age people were already working with crystals 10,000 years ago," said geologist Peter Amacher. The quartz was smashed together to then make arrowheads, scrapers or knives from the splinters. For our ancestors, crystals were first and foremost a commodity that helped to ensure their survival.

Let's turn the wheel of time forward to the Romans. Numerous finds prove that crystals were transported across the Alps. The crystals were cut into magnifying glasses or burning glasses and were used by the legionaries to make fire. In addition, the rays were also used for their beauty, as jewellery or temple offerings. A large crystal is even said to have stood in front of the Capitol in Rome.

In the afternoon, before the presentations, the Institute "Cultures of the Alps" offered the opportunity to visit the Pfaffensprung crystal cave in Wassen. "Rock crystals were already mined here in the Middle Ages. The chisels needed for this were forged on site," Amacher told us. The quartz was sold to Milan, where it was then used to make goblets, crystals and bling for chandeliers. "Crystals from Pfaffensprung can still be found today in the Sanssouci Palace in Potsdam," said Peter Amacher.

Around 1750, the first evidence emerges that crystals were also sold simply for the purpose of collecting, initially primarily by scientists. In his book "Der Engländer" (The Englishman), Peter Amacher has retraced the history of the British explorer F.N Ashcroft. He had bought and photographed thousands of minerals and crystals from Uri. Uri's blasters such as Albin Indergand diligently supplied the Englishman with material. Today, there are still more than 6000 from Uri in the collection of the British Museum in London. In 1950, the Strahlnerverein Bristen was founded - it is thus the oldest Strahlnerverein in Europe. In the 1980s, the trade in crystals was at its peak.

The law is (not) crystal clear

Georg Simmen, lawyer and former valley clerk of the Ursern Corporation, went into the legal aspects, especially the mining regal. This is the right to dispose of mineral resources. In the past, this lay with the kings. In Switzerland, he said, the cantons are the kings. "We have pure federalism in the crystals. The situation is anything but crystal clear," says Simmen. In cantons like Glarus and Bern, you can freely collect crystals. Solothurn, Appenzell Innerrhoden or St. Gallen have issued bans on collecting.

"Uri is a special case." The corporations of Uri and Ursern issue patents for the Strahlner for a fee. Together they issue about 375 patents. "The demand here is rather increasing again," Simmen knows. The Uri corporation, for example, also issues daily and weekly patents, Ursern only annual patents. In addition, the Ursern corporation does not allow blasting. The canton has also reserved the right to claim minerals found during tunnel projects. In addition to the laws and ordinances, the blasters are supposed to adhere to a code of honour. This includes not engaging in overexploitation or respecting sites already marked with tools or initials. Simmen sees a big challenge in glacier recession: "This opens up new areas and the run on them is very big.